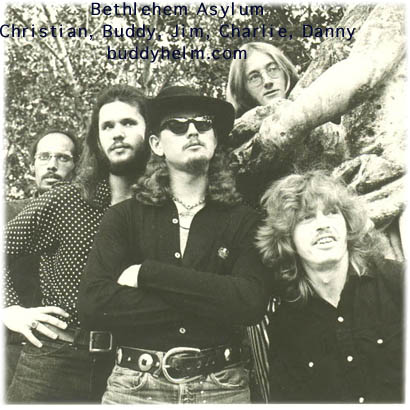 The Summer of love came late to the Seep South. Some say it never came at all. There were no real rednecks in The Bethlehem Asylum, it was a colorful coat to wear in order to fit in. Unless you were black or had really long hair or were a snotty college drop-out or a folk singer or a jazz musician, or a blues player or a minister of the Universal Light Church or just too freaky to pass as a redneck. Which we were.

We stood out like a sore but bright colorful thumb in Florida, Georgia, Alabama, Louisiana, and Mississippi in the late sixties, early seventies. The band traveled all over the South playing festivals, bars, concerts, antiwar rallies, love ins, art happenings and plain old rock ‘n roll bashes. We stood out because we were doing what we loved doing, which was playing great music: Our Music. We wrote it as a band even though the publishing went to certain names (mostly the record company)

When we were on stage the music was always fresh and exciting. The lyrics might be the same every time, along with the chord changes and hopefully the back-ground harmonies but the spirit was always new. As Jimm Neiman, the bass player/Captain Ego put it, “We play the soundtrack to whatever movie was going on.”

The actual experience of living as a teenager in the late sixties playing in a rock ‘n roll band was not anything like what the corporate media of today says it was. Being alive then was a question of choices. Either I could have gone to Vietnam and gotten killed like most of the other good ol’ boys I went to high school with or follow my heart and soul which meant risking my neck in more immediate places like Little Havana in Miami listening to great Salsa where they hated long hairs so much they stuck a gun in my face on a Saturday night corner on Calle Ocho. Or getting into black bars in southern ghettos where being white meant you were in big trouble. But that’s where the important music was; in the dangerous places.

The first performance was at Madam Taussand’s Wax Museum on St. Pete beach. but our home base in the beginning was the most famous coffee house in the South. The Beaux Arts. Where Jim Morrison got his start just a few summers before us. It was a page right out of Tennessee Williams’ world. Three story antibellum southern mansion run by Tommy, a retired Ballanchine dancer and his mother. Soon we were performing at Colleges around the state. Inevitably performing at antiwar rallies where the undercover CIA/FBI were taking our pictures. We were doin’ it for the music. But we were forced into politics by the events of the day. The Six O’clock News was showing body bags getting filled up with parts of good ol’ boys of every color in some god forsaken jungle in a place nobody ever heard of. The music was a voice that grew up out of the ground and found its way into the throats of the people. We could do anything. Either that, or get chopped up in the custom-made meat grinder. Things haven’t changed much. One thing that seemed different then was Hope. A sense of real Hope. Not the kind of hope where you hope you make a killing in the Stock Market, but the kind of hope where you knew that you could change the world for the better. Even in the Deep South. This seemed like a possible reality just beyond the horizon. A utopian dream of happiness, equality, and enough for everybody. It has been predicted and we were at the beginning of it. Just how much at the beginning we didn’t realize. We are also very naïve.

The Bethlehem Asylum would not have been such a success if it did not have a core group of supporters and followers. The people who drove across swamps and police blockades to see and hear the band thrash out their jazz, R ’n B Country Blues Rock ‘n Roll ol’ time religion mystical voodoo kind of music.     We wrote songs about them and sang about them on stage. We didn’t really have many songs about how some girl had done me wrong or some other safe subject. The songs were about the troublesome questions about honesty and soul. Although we certainly had our share of songs referring to the good things in life.

This story is for those who managed to survive a traumatic yet joyful and historical time and are still able to remember the real magic, love and hope that we still cherish today…..

Christian has disappeared, Buddy is in L.A., Jim is gone,  Charlie is playing Sax with Hall and Oates, Danny worked for Kinky Friedman and Billy Joe Shaver and has his own music as Panama Red.

My  band; Bethlehem Asylum rolled into Coconut Grove, Florida in our yellow school bus in the Summer of 1969. The Grove was a hip haven of retired beatniks, bronzed babes, pirates, poets, club owners and international hitchhikers. The girls wore bikinis all day. The guys were mellow, the sailboats were handy. The music was great.

We advertised our first concert with fliers. It happened above the post office. The only person who showed up was Jerry Wexler, Vice President of Atlantic records and producer of Aretha Franklin. Liz Campbell a great folksinger had recommended he come. He invited us to his house, We ate all of his food, drank all of his wine. Smoked all his cigarettes. He invited us to come into Criteria Studios to record some demos for Atlantic records, where James Brown recorded, “Papa’s got a brand new bag” with one microphone in the middle of the room. Since then Criteria had become the GOTO studio with state of the art engineers and equipment. But still the funky vibes of sanctified Southern R n B.

The sessions were rocky. Jim, the bass player insisted on re-recording my drum parts. He was dissatisfied with my performance on his songs. So he overdubbed the parts that he wanted to hear. We let him grand stand in front of the great Bones Howe and the Albert Brothers.

Bones was working with Aretha in the next studio and every few minutes dropped in to see how we were doing. Everyone was hoping for the best.

A few weeks passed and I picked up the phone. Our so called manager was finishing a conversation with Jerry Wexler on the other line. There was no contract.

I was heartbroken to hear that Atlantic had wanted to sign us but couldn’t.

“Our manager, I guess.” I said with a great deal of disappointment.