Guro Dan Inosanto, Bruce Lee’s partner, was  demonstrating knife fighting techniques to a select group of high level black belts; CIA, SWAT, SEALS, Special Ops, LAPD; but when Guro Dan wielded the blade it looked like he was painting a Jackson Pollack; gracious swoops and jabs, slices and lateral strokes that could have been any color other than blood red. He was calm, authoritative, demonstrating subtle moves;”This is defense…this is sport…this is training…this is for combat…this will take time for the bleed out….this is for the kill”. The Inosanto academy bleachers were full, over two hundred solomn spectators watching the greatest martial arts teacher in the world divulging Bruce Lee’s and other great fighters’ secret techniques.

“This is not just an art form…” He addressed the crowd. Large portraits of great martial artists hung overhead; Chinese, Malay, Japanese, Korean, Filipino; not only men, also women with secret techniques like stones woven into their long black hair that would crack a man’s skull like an egg with a swing of their diminutive shoulder.

“This is very practical information…” He turned to the ‘Odd Job’ type man standing to my left. “Tell them what it is like in Manilla, Arturo.” The stoic round man spoke with respect, “They will walk up behind you with a knife rolled up in a newspaper, stab you in the kidneys, take your wallet or your purse, and no one sees the blade.”

Dan suddenly stopped and looked at me. He looked at Francis Echinard, to my right, the French Savat champion and blues guitarist confreres of the late, great Lowell George. Francis was delivering me to his Sifu, who had requested from Francis, the ‘right’ drum teacher.  He turned to the group of black clad men on the sprawling mats, waiting for his next deadly lesson.
“All of you practice.” Dan said. They all bowed in deference as the master stepped backward off the mat, bowing, then turning to his right and hastily but with dignity walked around the cavernous room, turned the corner of the mat, heading in our direction. All eyes were on him. I realized that he was coming to us. I straightened up, put my hands together; fist in open hand, to bow to the master. He saw my actions and sped up, arriving in front of me before I could bow. He stopped, faced me, and bowed low, his eyes straight to the ground; an unheard of action for the master. I was non plussed. I felt every eye on me in the auditorium. I did not know why this was happening. I bowed slightly to acknowledge his display of honor. He stayed down for a long time, until everyone in the auditorium got it. Finally, Dan raised his eyes and looked into mine. I realized that he was insisting that I be the greatest drum teacher I could possibly be. I would have no choice.

Almost every week he showed  up early in the morning at our store for his lesson, whether he had just returned from Stockholm, Rio, Tokyo, Miami or where ever he was conducting seminars on martial arts. He was studious, humble, dedicated; the perfect student. “Do I have to learn how to read music?” he asked because a previous drum teacher had insisted he learn to read drum exercises. This was another example of a drum teacher giving inappropriate, even damaging experience to the student. That teacher was not paying attention to what this particular student needed. They were going on automatic pilot in their method of teaching because that is the way they were taught. This isn’t about music; but once the student gets this approach they will be able to play music as a byproduct of their own healing.

Drumming can create consciousness. It can grow like a fresh new leaf under the right conditions; the drummer can learn without mind numbing sight reading, without brutal training and without macho bravado like, “Harder! Faster! Louder!

People wanting to learn how to drum do not necessarily want to become ‘drummers’ in the traditional European/American definition. We are at a new stage in our mental development and the drum rhythms help us to integrate new functions that the brain is starting to implement; such as multitasking, improvisation, trance, courage, relaxation, healing, joy and of course dance.

Using the downbeat as a cornerstone for building a rhythmic vocabulary, I showed him the four beat  and the three beat structures that applied for indigenous rhythms all over the world. I knew that there was no way I would be able to teach Dan what he instinctively wanted to use the drum for. He would have to discover that himself. I would merely show him the parts that he could use, the building blocks of rhythm and he could put them together in his own fashion for his needs.

At one point, we stopped playing, he was dripping wet from exertion and I was cool and calm. “You have to be in SHAPE to be a drummer!” He exclaimed.

“Dan. You are in better shape than I will ever be in. You have to be relaxed. Let your hands do what they already know how to do.”

“Bruce Lee said the same thing to me.” he responded. “You are the Bruce Lee of drumming.”

I laughed. “That’s very nice, but it is not true. You are coming here to hear the same things Bruce was telling you. There is one thing you are not doing correctly.”

“What is that?” he asked, alert to improving his art.

He blinked his eyes in recognition, thought for a moment about how to do that. Then we played and instead of the toughest guy in the world I saw the young boy who was playing the drums out of sheer joy. I had succeeded. He was the greatest drum student I could have ever had. He sounded really good. Dan developed a drumming training program for his martial arts classes. The CD is a big hit, worldwide. “No 2nd Chance: Martial Arts Drumming” (or ‘No Second Chance’). Available on itunes and CDbaby. Guro Dan Inosanto is recognized not only as the greatest martial arts teacher in the world, but now also as the father of Martial Arts drumming in America. I couldn’t be more pleased with any student. 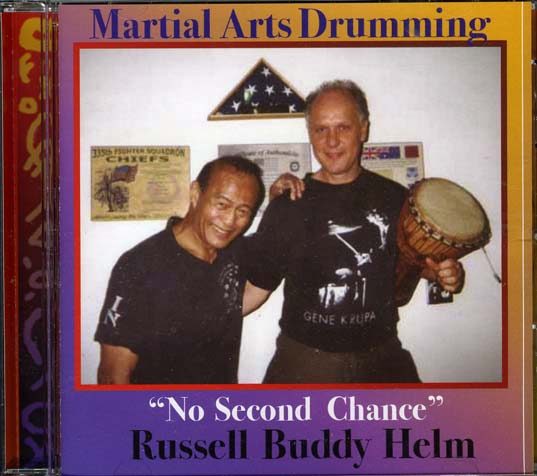