Chaz Chandler, organ player from The Animals, brought Jimi to London. Got him hooked up with management and started putting a band together.The British scene had sterilized the blues. Jimi ‘sat in’ at the Bag O’ Nails with Cream and blew Clapton off the stage. The word was out. Jimi was a real live authentic African/American (referred to as Negro in the English press), Blues guitarist. He scored the British military jacket on Carnaby Street. It was a red flag to the police. He caught some flak wearing it out, accompanied by his white girlfriend. Jimi knew what he wanted in a drummer. There were lots of auditions. Aynsley Dunbar was a great British Rock drummer, heavy and strong with orchestra fills. But he played without the loose, jazzy blues swing that Jimi needed behind his rhythmic guitar extrapolations. He demonstrated a swing feel on kit. Jimi playing relaxed and smooth, in control. Aynsley was the best, but a bit stiff. Jimi settled on Mitch Mitchel who had been a jazz drummer in London. He could swing. The rest is history. 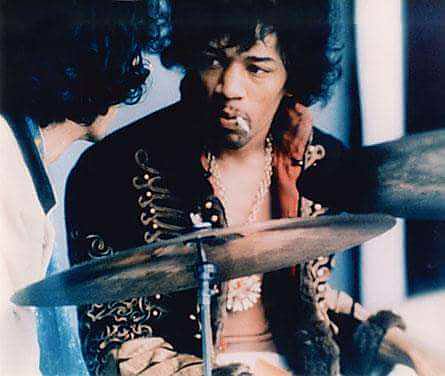