On stage at the International New Age Trade Show in Denver

1999. On stage at the International New Age Trade Show in Denver. I was brought there by the publisher of my first book on drumming, Llewellyn Worldwide, to give a demonstration of drumming as a meditative healing artform. The dinner hall was filled with over a thousand vendors from the three day show, eating on Llewellyn’s tab. It was a gracious affair. I had not performed in front of a large audience in several decades. They told me to bring some drums, so I fashioned road cases for the African djembes.  The head of advertising, Lisa, had set the theme of caribbean nights, there was a parrot on the mic stand, she introduced me as one of their new authors. I took the low foot tall stage,

“I want people to come up here and drum with me who are afraid to try this. Women! ESPECIALLY WOMEN! People who have never hit a drum. I don’t want any drummers! I want you to see that anyone can do this. Come on up. Don’t be shy.”

It is hard to believe now, that drumming had not ‘happened’ yet, but there were no drumming groups around the country then. It was not yet a national trend. Slowly with some shyness people came up. They sat down at the  carved African drums. I set the tempo with my tambourine on my foot and hit the downbeat in the middle of the drumhead. “Just get the downbeat going. Support that deep note in the middle of the drumhead.”

The downbeat is a New Orleans invention from about two hundred years ago. It was an expediency created out of the need to get everyone going on the same groove right away.

It was as if they found me in a cold storage vault, thawed me out and said, “Now play!” I took off and the group stayed on the downbeat and the place exploded with cheering and dancing. The whole room was on their feet in a matter of minutes, dancing and having a great time. The publisher was sitting at her place of honor and her eyes were wide, mouth open in astonishment.

“We thought you were just a writer. We had no idea you were this strong.”

“The books are just an attempt to write about this.” I gestured at the joyous throng of dancers, sweating and happy after hours of moving to a good beat. Drumming had arrived. 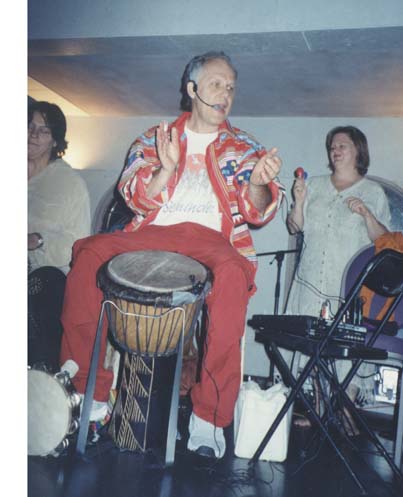