“You are a drummer!” The young Balinese man said in amazement 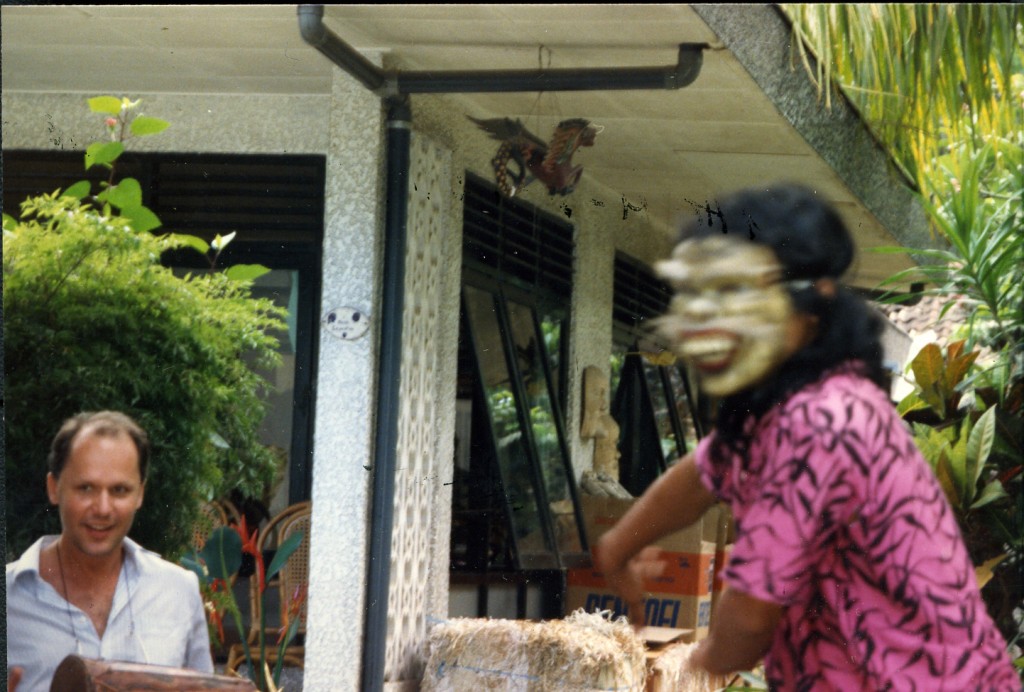 “You are a drummer!” The young Balinese man said in amazement. Cathy and I had found a little shop in the jungle up on the western side of Bali, above Kuta Beach, selling handmade artifacts perfect for her store in Santa Monica. I was along just to help carry. I had spotted a carved double headed dragon drum covered in dust under a shelf, and pulled it out, then tapped on it in the secret six beat pattern to give Cathy some bargaining leverage. He caught me by surprise with his observation.

“No. Not anymore…” I mumbled. I had ceased to be anything after leaving Lorimar, my dysfunctional marriage, that life.. Hearing Tim’s music had reopened a hole in my heart that had not healed. It was a voice calling out to me from beyond the grave.

Charlie had summed it up succinctly on one of his Hall and Oates tours through LA;  “You’re the free lance king of Hollywood, Buddy.  You can write, direct, shoot, edit, produce….but you are a drummer and you are going to have to come to terms with that, someday.” Questions the Jungian therapist asked me during my two hour lunch sessions triggered unanswered feelings about my father.

A very hot Latin woman walked into my office one day, “You don’t know who I am..”

“Yes I do.  You’re a film inspector.” One of the hundreds of employees under my control. She smiled a dark sexy smile, “No I’m not. I am a spy. I work for the front office. They really like you. They don’t want you to quit. They are making you a Vice President. Why do you want to quit?” The only reason I could give her sounded very odd to both of us.  “I am a drummer.”

That surprised her “Congero?”  “Si, timbalero, todo. Drumset; everything. I grew up in Miami.” That turned her on. “We must dance.” She offered. I thanked her but I still walked out.

I met Cathy through a friend and offered to help with her store. She asked if I wanted to go to Bali with her on a buying trip, so here we were, driving a right handed jeep up through the jungle looking for bargains.

I also insisted, “Not anymore. Dead rock stars, thieving managers, corrupt record companies. I don’t do that anymore.” I stated a little more bitterly than I had intended. It didn’t phase him. He put his hands together in the ‘Namaste’ gesture that means, ‘I see the God in you.’ I acquiesced, then said, “Ok. I’m a drummer. So what?”

“Then play!” He smiled with totally joyous conviction. He ushered us out into the jungle clearing and called for a young man who appeared from the back of this thousand year old jungle compound. The store salesman gave us both drums as the pitted ancient Krishna statues watched down over us. He then showed us a wooden monkey mask his grandfather had carved, with long white mustache and long white eyebrows. He put it on while the young drummer and I played around finding a groove we both could play together. The polite young drummer didn’t speak any English. His eyes widened when he heard me play but he didn’t back down, he jumped in and we went for it. Once we got going, the man in the monkey mask was transformed, and began to dance in long, slinky, low, slow moves. He squatted down and moved like a serpent, feeling the air with his long arms. The groove started to take hold of us. I looked up into the golden green sunlit banana palm leaves and began to feel good. Better than I had felt in a long time. I was remembering who I was and how much I loved drumming. We drummed for  hours. It was timeless. It turned into a festival. People came out of the jungle with food carts. Two policemen riding tandem on a motorbike stopped in to enjoy the event. I found out later this was the ‘Hanuman’; the monkey god dance. It is an ancient exorcism ritual. It moved something inside of me. I felt the change in my heart. I remembered how much I loved drumming; since I was eight years old it was what I had done and how I had identified myself. When we arrived down in Kuta, the word had spread. A Balinese man came up to me on the street, “Drums Patina!” He kept repeating. Finally, I understood that he had antique drums for sale that had polished shiny patina from the cloth robes of the master drummers holding them between their legs for generations. They had snake skin heads and had real magic in them that I could feel.

“Take these drums back and heal your people.” He said urgently. It was more than a request.