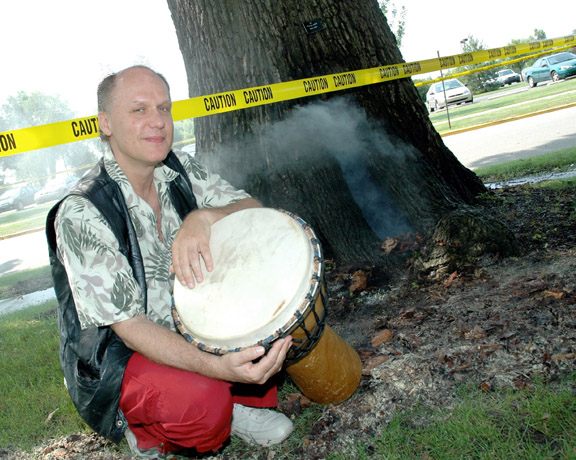 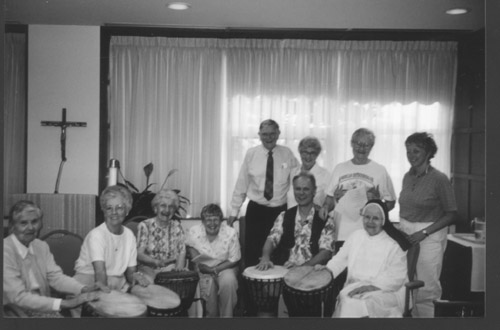 This djembe from Ghana was stolen from a Dominican Nun in Saline, Michigan just a few days ago. This drum was part of the miraculous event that transpired at the Adrian, Michigan mother house for the Dominican Nuns Order.
1,000 NUNS
I drummed at the mother house with a thousand nuns. We prayed for the children of Irag and the families of the soldiers and civilians. It was the date that Iraq was initially to go back to civilian control, (some years ago).
I was very tired and worn out from weeks of touring and teaching healing drumming meditations all across the U.S. I had just come from Kansas. I was tired as I drove the rental car up to the Dominican Mother house in the small remote town of Adrian, Michigan. I used the moment to talk to God.
“Look, I am tired. This is beginning to be a lot like work. If you don’t give me a sign. I’m going to stop doing this. But you have to make it a big sign. Because I am deaf, stubborn, lazy and I don’t pay attention. So it’s got to be real obvious otherwise, I’m going to miss it.”
I pulled into the parking lot of the sprawling Dominican Order Convent and put on my best smile and went to work unloading the djembes I had brought with me.
The nuns had invited me to come and hold a drumming prayer group. The Dominican Order is an impressive group of women who are committed to the good causes. We drummed in the chapel for two hours with two hundred nuns and a video feed out to the dormitories where there were a thousand nuns sharing the groove. It was a powerful experience. At the end, Mother Superior came in and spoke to me quite simply saying, “We have been here in the Dominican Mother House for over one hundred years. We built it. We have had a favorite tree that has been here since the beginning. It is an Oak tree and it is in front of the Mother House. It’s old and split up the side but it is still alive. While you all were drumming it caught on fire. it is burning right now. The grounds keepers are calling it spontaneous combustion.” The mother Superior gave a little shrug then continued, “That happens..”
None of the nuns said a word. Finally the elder Nun, who was eighty years old and still in her habit growled with conviction. “When are we gonna do this again?”
I asked if I could see the tree. The nun who had arranged the event bought the drum that I was playing after the photographer from the Adrian newspaper took pictures. She has been using the drum in prayer groups for many years.
We did it five more times over the next two years. Each time it was memorable and inspirational.
This large djembe and a smaller djembe was stolen by a man she worked with and trusted. Keep an eye out for it.

The firetruck was leaving as Sister Sharon drove me up to the smoldering tree. One solitary nun stood watching at a distance. Plus two grounds keepers. Firemen could not find a reason for the tree to be on fire. They cut a hole in it. Sprayed it with water. Put a hazard tape around it. It was three stories tall enveloped in a huge cloud of white aromatic smoke. Red Oak smells beautiful when it burns. The Adrian Gazette news photographer was excited. “I got the message on my CB and followed the firetruck up here. While you all were drumming, there were flames coming off the top of the tree. I got pictures.” I looked up, puzzled, “The leaves aren’t consumed?” He grinned, “Yeah. Weird isn’t it? Get in there. Let’s get some pictures.”
The city cut the tree down. Eliminated even the roots, down to a smooth putting green of level grass. The only clue was the old sidewalk that had curved around in a half circle where the tree had stood. But the last time I was there, two years later, a new sapling was coming up.