Goddess of the Crossroads

2005
I was having a great time. I was touring on my own; didn’t have to babysit a band. I used Chuck Berry’s philosophy. Everybody should know his songs so he doesn’t need to rehearse. He shows up at the gig and the promoter would hire the local musicians. That’s how I was doing it now with the drumming workshops. Everywhere I went the people who showed up were my band. There were no drumming groups then. I know it’s hard to believe. I was all alone out there selling snake oil. It was more like circus than gigs. I wasn’t in smoke filled bars or sterile dressing rooms. I knew my window of opportunity would diminish as the local drum hustlers figured out the downbeat and then go into business on their own. I made the most of those years. I stayed in people’s homes and ate their food. I learned about people, and I learned about myself as they looked at me. The gift that I was giving was through me but it wasn’t me. I could see the steady laid back grooves healing people. They said inspired things to me so I had to continue; I couldn’t think of anything better to do with my life. I had help. Cathy kept the store going while I hit the road. But I wasn’t there that much. I was seeking the refuge of the road. Charlie understood. We got together in the most uncanny ways. We would call each other at exactly the same moment after not talking for months. He listened to my burgeoning theories on how rhythm heals and recorded his masterful magical flute and sax on the tracks in my second book, “Way of the Drum”. He was not from a wounded background so he could understand without reacting. I envied people who had parents; especially a father. But I also bridled at the thought of marriage and family. I was in limbo of intentions; not knowing what else to do and not caring. The drumming trances were a way to go into a sacred place. I could show other people how to access this safe space of forgiveness and good intentions.

The French Quarter before Katrina was a cool place. Tacky and touristy horror stores like LA punk gone Voodoo. I felt at home. New Orleans does that to some folks.
The night air was sensual and heavy, and smelled of spicy soul food as I climbed the steps into Marie Laveau’s House of VooDoo.
“NO CELL PHONES” the sign read,
I immediately took out my cell phone and called somebody. I do that sometimes. I will do exactly what someone says not to do. It’s like a command to a computer. The Goth girl barked at me. I wanted to do a drumming workshop in here. It was important to do this in New Orleans. It was home coming for the downbeat grooves.
They weren’t interested. No one was. I could not get a single drumming workshop going in the French Quarter. I came out of Marie Laveau’s with a statue. A red statue of the patron saint of the working girls; Goddess of the Crossroads. It started to rain. Maybe I displeased Marie by using my cell phone in front of her jewel encrusted alter. Or maybe the rain was a cleansing, forgiving rain. I decided to walk in the sweet New Orleans drizzle and listen to the music of the languages on the street. I love listening to Cajun, Creole, Acadian and all the other dialects. The Goddess of the crossroads was wrapped in tissue and placed in a back storage drawer in the white Dodge Caravan that had been given to me in Florida. I felt so lucky all the time. Miraculous things were working. I had a purpose. I forgot about the statue in the back of the van as the tours continued. I had intended to bring her back to Cathy. I had angels on my side. More than one. I could feel it and more importantly I could see it. The van had been donated to Spirit by two body workers in Florida who had bought a new SUV. Their neighbor knew I was looking for one. We had drummed on it. They gave me the papers saying, “It is a great Florida van.” I found out what they meant when it ran impeccably up to DC and Cape Cod, Woodstock, then out to Michigan for another drum with the Nuns. I hit Pennsylvania in the middle of November and there was no heater in the van. I was frozen, shoving McDonald’s napkins into the airvents that would not shut until I found an all night redneck truck stop that had duck tape. I call it gaffers tape because that is what its called on the set. You need tape; ask a gaffer. It’s the guys who hang lights and run juice with the belt full of items of interest on a movie set.
“Do you have any gaffer’s tape?” I chattered to the toothless local in the backwoods of darkest Western Pennsylvania.
“Whut?”

I thought I was doing what I should be doing until I died. That was Okay by me. My definition of success had narrowed to Elvis’ scenario; Die while I’m still being booked. The tickets will be collector’s items.
A middle aged housewife was standing next to me in line at a pot luck lunch in a beautiful lakeside state park in the wooded hills of southern Indiana amongst a bevy of sweet well fed midwesterners who were celebrating something I wasn’t quite sure of. “Has anyone told you that you look exactly like Buddy Helm?” she said sincerely as we scooped potato salad onto our dixie plates.
“No. Never.” I said.
“You really do.” she insisted.
“I am Buddy Helm.” I eased her mind.
She squinted up at me, “What are you doing here?”
I did a drumming workshop at a farm up the road a few miles and they brought me here. I’m gonna play a little.”
“You want to come down to the Gulf coast and drum at our retreat center outside of Gulfport, Mississippi?”

There were huge towering bright electrical billboards erected on the mud flats east of New Orleans. I thought they were too big, rude; and I’m from LA! It was an affront to the land and the sea. I used to drive that road when it was quiet and dark and you could even hear an alligator growl. Now, the glow was like radioactive fallout. There were too many of them, taller than an apartment building and uglier than sin. Jerry Jeff’s face, larger than a semi truck grinned down on the continuous night stream of cars along the redneck Riviera. When I arrived in Asheville, North Carolina, all the Gulf coast gigs I had booked mysteriously fell through. I thought it was odd. Katrina hit and I realized that I was very lucky not to have been there. The Goddess of the Crossroads might have been looking over what I was doing and putting in a protective hand. Someone seemed to be. 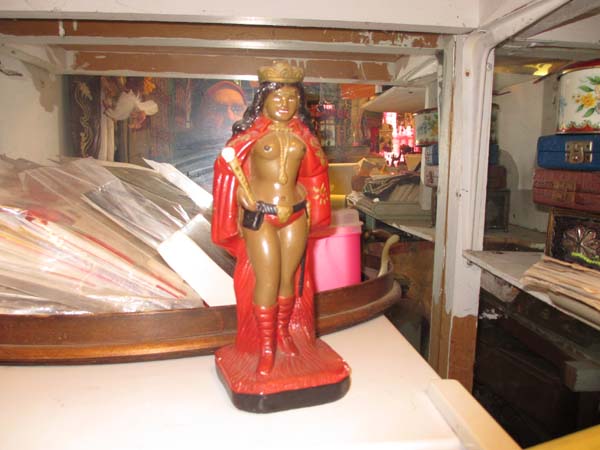 This entry was posted in Drum History, History of the Groove, Uncategorized. Bookmark the permalink.